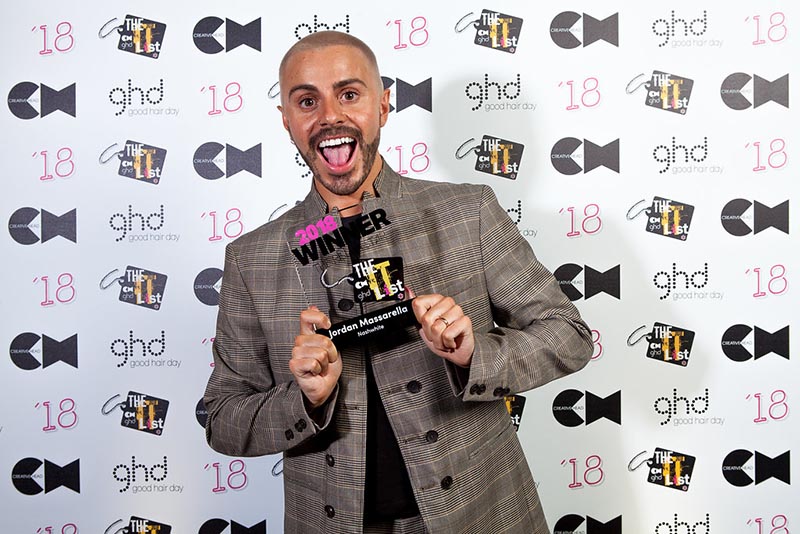 The It List gives people a goal, and it has given me a goal for the past two years – it’s amazing to win!

The judges were incredibly impressed with young Jordan Massarella and his seemingly limitless imagination. With a background in classical dance, Jordan has all of the discipline needed to make it as a top stylist! With a couple of big wins under his belt and confirmation as a L’Oréal ID Artist 2017-2019, we expect to see this star shooting to new heights. “He has the ability to engage with his audience and has the capacity to leave an impression” said Jordan’s bosses, well he has certainly lived up to that statement! 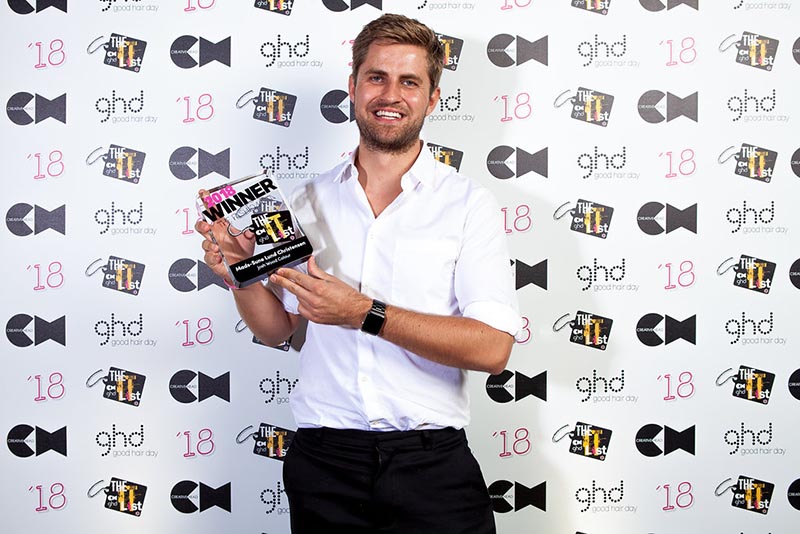 I’m really not used to giving speeches, but I would like to thank Josh Wood for all the opportunities and the Josh Wood Colour team for all their support

Mads-Sune Lund Christensen has had a mad year – as Josh Wood’s first assistant he’s been painting up a storm backstage at Versace, Miu Miu and Prada. The judges were particularly impressed with his work on the petrol-blue bowl cuts and crimson flashes for the Marc Jacobs A/W18 show – looks which went viral within seconds on social media. Praised for helping colour get the recognition it deserves on the runway, this gent is certainly creating impact in fashion circles. 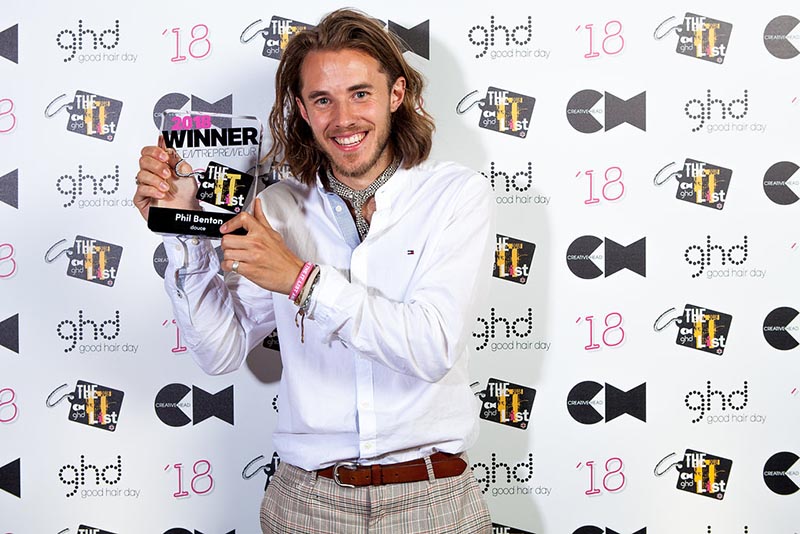 This award may be for an individual, but you can’t do this on your own – so big up my family! I’ve created a salon on wheels – and I’m loving life.

A refurbished Airstream might not be a classic salon setting but it’s given Phil Benton the creative freedom to pitch up wherever he likes. His pop-up salon concept, douce, has seen him style at festivals, weddings and regular appearances on London’s Liverpool Street. 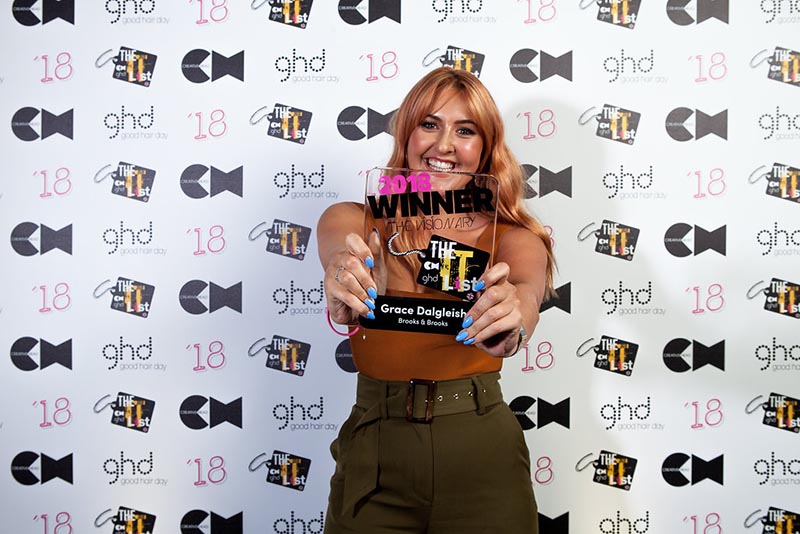 I’m speechless! Sally and Jamie Brooks, thank you for all your support and encouragement –this is for you

The It List’s youngest winner at just 23, Grace Dalgleish is already showing so much promise for such a fresh stylist. Her passion for colour and street-casted models ensure that personality and originality radiate from her work. Grace starts every creative process with a feeling, capturing light bulb moments and translating her dreams into reality. Continual pushing of creative boundaries paired with a fashion-led focus give this girl her recognisable style. 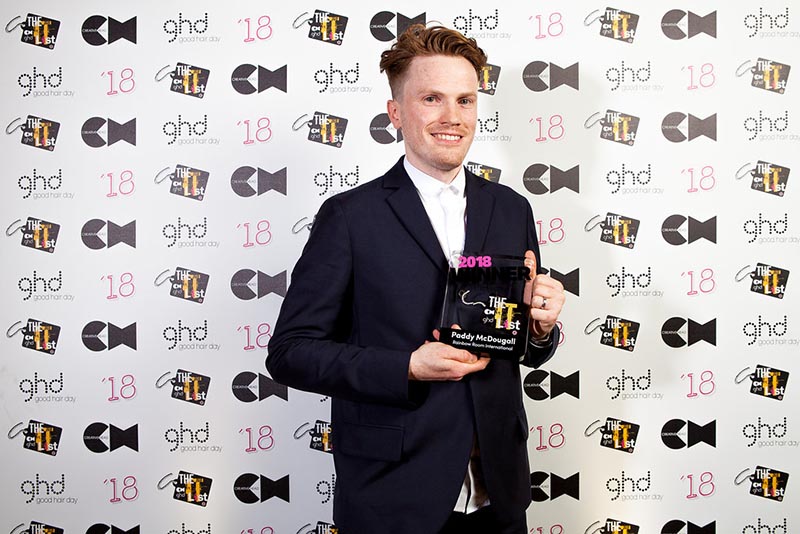 It just feels amazing to be up here winning an award in front of the people who I admire so much. It’s so surreal – thank you anyone who has helped me.

He’s finally nailed it! After a couple of near misses, Paddy McDougall swept the title of The It Guy 2018. The judges were impressed by his dedication, splitting his time between the salon and his passion for session work, assisting Duffy at shows including Marni, Dsquared and Topshop Unique, as well as on campaigns for Louis Vuitton. “Paddy is one of those rare talents that comes along in this industry once in a blue moon,” says his mentor, session stylist Nick Irwin.

To win the title of The Visionary and The It Girl is no mean feat, but Grace Dalgleish was on fire and did the double! The youngest member of the Brooks & Brooks artistic team, an educator for L’Oréal Professionnel running her own colour course at the age of 23 – need we say more? In just three years, Grace’s maturity and eye saw her selected to create launch images for L’Oréal Professionnel’s Botanēa colour range in the UK. Stints on the Salon Smart stage and some impressive shoot work mark this lady as one to watch.

Inspired? Filled with fire to get on The It List yourself? Then make sure you’re the first to find out when the 2019 awards launch by signing up here!

Historic aesthetics viewed through an avant-garde

We’re spilling all the secrets to success, becau

Bridal beauty with an editorial edge from @nicky_b

"With fluid, mirror-gleaming colour and an eagle e